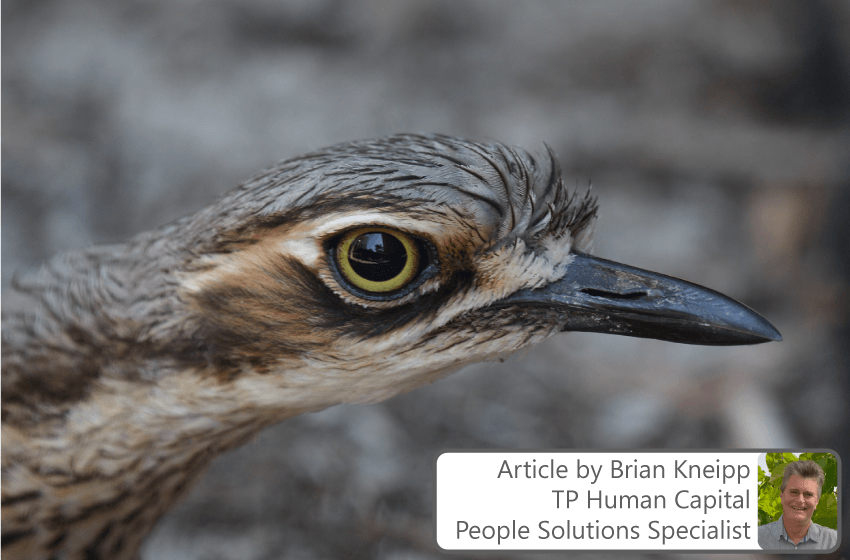 I’ve been using Curlews to treat my stress and improve my mental and physical well-being…I don’t mean I’m putting them in a blender and ingesting them as a tonic…no, I’m just watching them, and I think it’s doing me a lot of good.

I’m referring to the Bush Stone-curlew of course, Burhinus grallarius, and its wailing call is for me one of the most characteristic sounds of my home town.

My bird book describes their call as,

“An eerie, drawn out, mournful-‘wee-ier, wee-ieer, whee-ieer, whee-ieer-loo’. Each call rises, strengthening, faster, building to a climax, then trails away. Calls are often, probably typically, given by several birds. One starts, another joins in; calls overlap, building the intensity of sound. Sometimes other groups will join in or answer from afar. At night, these spine-tingling sounds will carry far across lonely bush and paddocks.”

(Field Guide to the Australian Birds by Michael Morcombe) 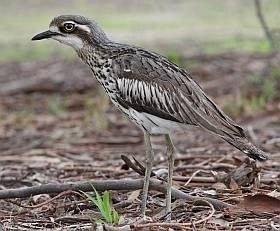 If you live in North Queensland you’ve heard these birds before, and probably seen them camped under low trees or shrubs during the day (they’re mostly nocturnal) in parks or on the edges of sporting fields. They are very good fliers but seem reluctant to take to the wing, preferring instead to skulk away in an exaggerated head down high–stepping silly walk, or to freeze completely, relying on their belief in their own invisibility. In fact their camouflage is very effective on a background of leaf litter but they don’t seem to realise it’s quite ineffectual when they’re in the middle of a brightly lit football ground.

Their other-worldly wailing can be quite polarising, some people love them and others loathe them.

I fall firmly into the former group as I’m an unabashed curlew admirer, but I’ve always been something of a birder anyway. Please don’t mistake me for the ‘twitcher’ kind of bird-watcher, the kind who keeps lists and detailed field notes, carries multiple optical devices with them at all times and who prefers to pursue their enthusiasm in the company of like-minded souls, many of whom are bound to be wearing cardigans.

I’ve joined a few bird-watching clubs and societies in my time but I never lasted very long. There are two reasons for this; Firstly, I don’t like paperwork. The idea of having to keep up a list of every bird I’ve ever seen fills me with the screaming heebie-jeebies. Secondly, I subscribe to the Groucho Marx view of social institutions in that I would never want to be a member of any club that would have me as a member.

This doesn’t mean I’m some sort of birding lightweight; au contraire dear reader, my list, should I ever be interested enough to make one, would make pretty impressive reading to a member of say, the Melbourne Ornithological Society and over the years I have certainly demonstrated some pretty obsessive behaviours in pursuit of certain birds.

There are 24 species of Raptor (diurnal birds of prey like hawks, eagles, falcons and goshawks) in Australia and I’ve seen them all breeding and nesting; likewise for the 10 species of kingfishers. If you’re a birder this is pretty heavy duty…not many people can say the same, even amongst professional ornithologists.

That’s because some of these birds are not only rare, but they live in some of the most remote and inhospitable country in the continent. If you want to see them you have to get serious about it. As a young man I can remember getting a telegram from a friend (yes, a telegram…younger readers will not be familiar with the term but it was a primitive form of email that relied on steam power) that said simply ‘Black Falcon nesting Strzelecki track’.

I immediately quit my new job, loaded up my Kombi and drove to the desert where I spent the next two months camping and looking at Falco subniger every day. I came home broke, a stone and a half lighter and looking like death but I’d seen my falcons!

Ok. So I like birds. What has this got to do with coping with stress and mental health issues?

The fact is that most people can improve their health and well-being, both physical and mental by exposure to some aspect of the natural world.

You mightn’t feel the same way about birds as I do but think about it: It’s a very rare person indeed who doesn’t get some kind of positive feelings from watching a sunset, or a view of the ocean or the mountains, or by walking amongst trees or watching a possum or even patting a dog. There is a vast body of research, particularly in the areas of Evolutionary Psychology and Early Childhood Learning that suggests a huge range of benefits that can be attained simply through exposure to the natural world.

Observing and immersing yourself in nature is a form of meditation or ‘mindfulness’. It can physically and measurably reduce some of the stress-associated chemicals such as cortisol and increase levels of beneficial ones like serotonin and oxytocin (the so-called ‘love drugs’). Some studies have also suggested that neuro-systems linked to creativity and problem-solving are enhanced or made more accessible by exposure to a natural environment.

The curlews came to roost in my yard about 2 months ago, a pair of adults and a teen. I had planted out a large number of native trees, shrubs and grasses only 4 months beforehand, with the specific aim of attracting more birds to the garden (including the curlews of course). I dedicated a whole corner of the yard to provide for their needs. Under an existing Poinciana tree, I laid newspaper and mulched over the existing lawn and planted native grasses. We added a kiddies’ clam shell wading pool pond with some plants and fish and waited…

The first time they used it I danced for joy. That night while they were absent feeding and much to the amusement of my wife, who encouraged me nonetheless, I worked by torch light to extend and improve their habitat.

These birds have given us endless hours of pleasure. They can be nervous to the point of madness, but they’ve grown quite used to us now, and every day they seem to show us another side to their unique characters.

The time I spend each day watching the curlews is definitely therapeutic. It calms and centres me somehow…maybe I find it comforting to know that, in the words of one of my favourite songwriters (me dear reader)…

“Though I’m losing track of things by inches and degrees

I know the world will keep on turning, with or without me.” 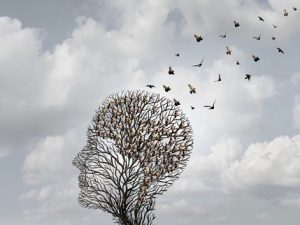 I urge you to try and get some nature into your day. Fifteen or twenty minutes spent simply sitting in your back yard or a park doing nothing much at all can have significant impacts on your stress levels and thus on your whole life.

I just stepped outside a moment ago and checked on our little flock. They’ve started using other parts of the yard now but today they’re back in their regular haunt. My wife just fed the fish in the pond and got closer to them than ever before. They’ll be eating out of our hands before long.

Curlews can live to be over 30 years old and they mate for life so I’m hoping this is the beginning of a long friendship and I’ll still be delighting in them when I’m in my nineties. You don’t need your own  curlews to get the same benefits. Start today. Go sit on the beach for a quarter of an hour and see if you don’t feel better for it. Happy curlewing to you all.

Posted in Blog
← As the leaders of tomorrow, what lies ahead of us?Hose-Gate: It’s not easy being green →