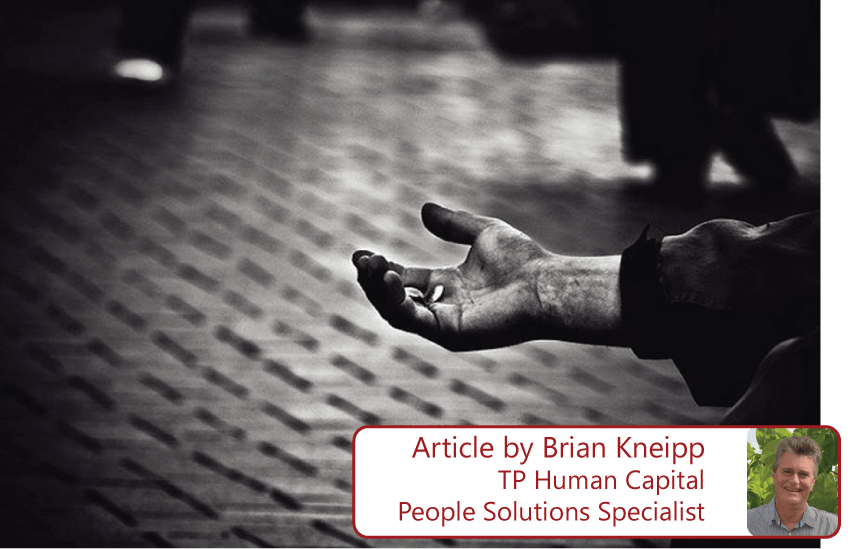 I once walked past a man who was dying and I didn’t even bother to stop.

I’ll tell you that story in a moment, but because I’d like to use it to illustrate our theme today, which is concerned with why people are often reluctant to speak up or act in ways that don’t fit in with the norm, I’d like to take you on a little side-track first.

You’re probably aware of the ‘VW Scandal’ that erupted in September 2015 when Volkswagen was forced to admit that at least 11 million of its vehicles were equipped with software that was designed to cheat on emissions tests.

Basically this meant the vehicle’s sensors could tell when it was being tested and alter performance to suit. Once the testing was over the vehicle reverted to ‘normal’ and far more polluting (up to 40 times the USA allowable Nitrogen Oxide emissions) performance. VW will recall over twelve and a half million cars worldwide and the scandal has already resulted in a one-third reduction in stock market value and the resignations of some of VW’s chief executives. Since there must have been a chain of command that approved the fitting of cheating devices to these vehicles means more heads are sure to roll.

How did this happen? Many many people at Volkswagen must have known of this plainly illegal fraud and yet no-one within the organisation spoke up…it was the Environmental Protection Agency in the US that uncovered the truth.

The concept of a ‘herd mentality’ or ‘mob mentality’ relates to the way people are influenced by their peers to adopt certain behaviours, attitudes and actions. In the workplace this can mean that terrible practices can be occurring with many people aware of it, yet nobody is prepared to stand up and question that behaviour (as apparently happened at VW.)

This idea of a ‘group mind’ started with 19th Century Social Psychologists Gustave Le Bon and Gabrielle Tarde and Sigmund Freud and Wilfred Trotter’s Instincts of the Herd in Peace and War (1916) is regarded as a classic of Social Psychology. Since then there have been countless experiments showing how strongly people can be influenced by their peers and I’ve listed some of them in the Appendix for your amusement and edification (and some are very funny, check out the ‘Candid Camera’ Lift Scene for instance).

There is a particular aspect of Herd Mentality called ‘Diffusion of Responsibility’, which is a sociopsychological phenomenon whereby “a person is less likely to take responsibility for action or inaction when others are present.” (Wikipedia) It is considered to be a form of attribution: The individual assumes that others are responsible for taking action or have already done so.

The phenomenon tends to occur in groups of people above a critical size and when responsibility is not explicitly assigned. It rarely occurs when the person is alone and diffusion increases with groups of three or more.

Now with that in mind let me tell you a little ‘Diffusion of Responsibility’ story of my own:

There was a man sitting outside my local shop one morning. He looked to me like one of the homeless people who had a kind of permanent camp in the bushland adjacent to my beach side suburb.

At that hour the shop was crowded with lots of people buying newspapers or milk or whatever and we all walked past this man as if he wasn’t really there. He was obviously trying to say something, but his speech was so slurred it was impossible to understand him, and he seemed physically uncoordinated and shaky. I just assumed he was drunk and was asking for some money.

Now normally I would happily give a beggar some change, I find it’s a cheap way of alleviating some of my First-World white middle class Catholic guilt, but on this occasion I had nothing but the price of a paper in my pocket and I wasn’t giving up my Times cryptic crossword for anybody.

So I just walked in and out and hardly gave him a glance, exactly like my fellow suburbanites.

It was my day off and I strolled home, had a leisurely breakfast in my tropical garden, read a few stories about the dreadful misery that was happening elsewhere in the world, did the crossword and had a swim. Life could be worse than this I thought.

At about 11am, some four hours after I had been there earlier, I walked back to the shop to get something and the man was still there. He looked even the worse for wear, and this time I had some money in my pocket, my guilt kicked in, and so I approached him. He seemed to be asleep so I just put the money on the bench next to him and was actually turning away when he suddenly jumped and groaned loudly.

He turned his head to me and tried to speak, I was close to him now and for the first time I realised that something about him was definitely not right…’This guy is a lot more than just drunk’ I thought. He seemed to be gesturing at his legs now and when I finally looked where he was pointing I realised what was wrong with him.

His left foot, and most of his leg, was grotesquely swollen and covered in red and purple blotches. It was visibly throbbing. I now saw he was having regular minor convulsions too, where his whole body would shiver and his eyes would roll back into his head, and in between these mini-fits he would fix me with an imploring and desperate look while grabbing at my arm and making efforts to speak.

I was shocked of course and it took me a moment before I could say to him, ‘It’s alright. I’ll get you an ambulance,’ and the shopkeeper and I were giving him some water when the paramedics arrived. Very shortly afterwards they were racing at high speed with sirens wailing to the ED of our local hospital, which is where I caught up with him again a couple of days later.

His name was George as it happens, same as my father’s, and he hadn’t been drunk or stoned, he had been fishing in the shallows near the creek mouth and had stepped on a stonefish, probably a Reef Stonefish (Synanceia Verrucosa), which is considered to be the most poisonous fish in the world. It has thirteen stout spines along its dorsal fin which can inject highly toxic and extremely painful venom into the foot of anyone unfortunate enough to stand on it.

Biology buffs will be interested to learn the venom has both cardiovascular and neuromuscular toxicity, consisting of both enzymes and non-enzymatic proteins, and the mechanism of its action isn’t yet fully understood, the rest of us can liken it to getting simultaneous bites from several black widow spiders and a couple of tiger snakes. Many people across the Pacific Rim die from the effects of Stonefish venom every year.

George had been in extraordinary pain, the neurotoxins had rendered him incapable of speech, he was partly paralysed in his upper body and he was desperately trying to get someone to help him, yet person after person, (me included!) simply walked on by… (He would almost certainly have died had he not been given antivenin, the doctor told me he probably wouldn’t have lasted another couple of hours without treatment).

George and his family saw me as a Samaritan who had shown compassion when others had callously spurned him. This was complete nonsense of course, if I hadn’t have run out of sugar or whatever it was, I’d never have returned to the shop at all, and I’d already walked past him once that morning anyway.

I think that even if I’d had change the first time I wouldn’t have recognised that he was ill, I hadn’t actually seen him, and neither had anyone else.

We weren’t being callous, it was simply that when no-one else took action, then neither did I, and that is an example of ‘Diffusion of Responsibility’ in action. Even when I did try to give him the money I hadn’t understood his predicament, if he hadn’t jumped and groaned at that moment I’d have left him there. I assumed that because no-one else seemed concerned then neither should I.

I never told George or his family that I wasn’t really the man they thought I was, and in fact, after that one visit in hospital I never even saw them again, but the incident had a deep effect on me. Why? Why had I walked past? Why had we all walked past?

When I later studied some of the myriad psychological research that has been conducted in this area I was somewhat surprised and a little perturbed to learn that human beings can be induced to do quite extraordinary things if the circumstances are right:

Subjects ignoring smoke that is seeping into a room, giving (simulated) electric shocks to strangers even when their victims are screaming and begging them to stop, not approaching or stopping to assist a man apparently collapsed on the street, turning to face the rear wall of an elevator because they see other citizens doing so and many others…(see Appendix).

Over and over again the research shows that humans are very attuned to how their fellows are reacting in any situation. We are reluctant to stick our heads up above the parapet, we don’t want to stand out from the herd for very sound evolutionary reasons and this can mean we are prone to making mistakes and errors of judgement.

One thing my interaction with George did teach me was to try and pause a moment and look again, and even more importantly to speak up, even at the risk of appearing foolish.

That’s not always easy of course, but in any relationship, be it professional or private, the ability to safely and openly question and critique the actions of others, (thus avoiding some of the effects of Diffusion of Responsibility), is fundamental to success.

Want to learn more… Join Brian, Scott and Dean for our next HR Breakfast 25 February 2016.