That happened over 40 years ago now but I remember it vividly and probably not for the reasons that you’d expect dear reader. I remember because it taught me a fundamental truth about the nature of work and the importance of what might be called ‘light-heartedness’ in the workplace.

I met Treetops at university. He was only five years older than me but already married and with a couple of young children. He was a full time student while managing to run a small business cleaning pubs four nights a week.

Tops, as we called him, was a very tall thin individual with a huge head of wiry black hair, thick round glasses and the air of a man who is just about to break into laughter. He was always in a hurry and always quick to engage in joking and banter, but most of all, Tree was a doer…if he took something on then he did it, and always to the very best of his ability. I got to see these qualities close up when he hired me to work on his cleaning team. 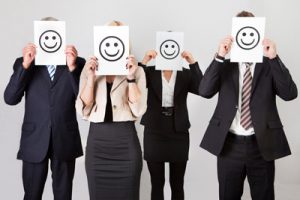 With the benefit of hindsight I can identify some of the very simple and basic management practices that Tops used all the time, and though he seemed to come at them quite intuitively, they are skills that can certainly be adopted and learned by anyone in a leadership position. The foremost of these principles informed his every action in the workplace, it was that work had to be ‘fun’.

I’ll tell you how he did this, but first I want you to understand the concept. I don’t mean that everyone’s work life should be a barrel of laughs…sometimes the work itself requires a certain seriousness or gravity…open-heart surgery or grief counselling don’t seem to offer much opportunity for levity…but in fact, throughout a long and varied working life I have been convinced that the more difficult the task, the more important it becomes to approach it with a light-hearted attitude.

I read the other day of a soldier who had lost his legs to a landmine, and while he was being loaded onto a stretcher after the explosion, was laughing and joking with his comrades and the medics that now he would be able to fulfil his dream of being a Paralympian.

There are many examples of this kind of gallows humour, but they’re always in very high stakes situations. Tops and the rest of the team weren’t saving lives, we were cleaning pubs, not exactly a life or death situation, but the job, as you’ll see, was by no means easy, and Tops also had a disadvantage that I’m sure some of you will recognise: we were all mates, we socialised together and saw each other on a daily basis outside of work. At work however, Tops needed to be our boss, he had to be a leader and take on the status of that position, and that’s not an easy trick to pull off.

How did he do it?

There were four of us in total and the working day commenced at about 1:30 am when Tops would pick us up one by one (we all lived quite close to each other) in his tragically unmaintained Bongo van. He was always on time and he would never wait more than a minute for you. If you weren’t ready and waiting you missed out, or had to find your own way to the gig. Tops made this perfectly clear but did so without animosity of any kind, he was happy to give you a lift but only on his terms. 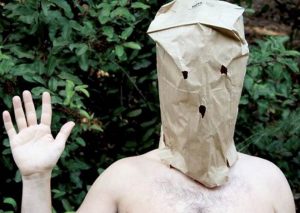 Every time he picked me up there would be a surprise of some kind. One morning he might be driving with a paper bag with cut-out eyeholes over his head; on another he might have a water pistol or a toy gun; sometimes it was as simple as a cup of coffee or a muffin for me and the other guys but there was always something!… Some small action that cut the routine and drudgery of another day at work. He never planned these little surprises, they were whatever he could come up with as he left the house but I grew to look forward to them so much that I’d sometimes reciprocate by trying to surprise him and this soon became a kind of game that the whole team played.

At the beginning of every job we went through a short ritual. Tops would line us up at the bar and allocate our different tasks. He tried to vary these jobs regularly for myself and one other team member because he understood we got bored with repetition. He rarely changed our other compatriot’s duties however, because he actually preferred the same routine.

Once the tasks were sorted and he had checked that we all had the resources we needed (buckets, mops, disinfectant etc.) he would pour us each a shot of liquor. The specific tipple was always chosen by Tops, and always for its ‘exotic’ nature: Crème de Menthe, Curacao, Zambucca or some ghastly yellow brew whose name I’ve mercifully forgotten. At our leaders’ word we would all scull a shot of this poison, slam the empty glass on the bar and immediately start work.

Anyone who has ever worked as a cleaner will tell you that yes, people really are pigs, and the work was physically hard, tedious and dirty. At the time it was not unusual for me to be at Uni during the day, playing guitar in some dive at night and going straight from the gig to my cleaning job. I was often very tired and so were my colleagues who were all leading similar kinds of ‘burning  the candle at both ends’ lifestyles.

Tops never let tiredness interfere with his work ethic. He only had one gear and that was flat out. In action he looked like the Tasmanian Devil on speed. He worked as hard and as fast as he could and when he’d finished his own tasks he’d immediately rip in and help others. It was very difficult for the rest of the team to bludge when faced with that example of furious industriousness.

Tops had very high standards too and he insisted that we all met them. In this he very much led by example. Early in my time with him I can remember I’d scrubbed and mopped a floor and Tops came in and inspected it and found it wanting. Instead of telling me to do it again he said “Look…I’ll show you.” And made me sit on a stool with a drink (which he’d got me) and watch him do it. Now after about 30 seconds I was protesting “I get it Tops. It’s fine. I’ll do it!” but even then he wouldn’t let me. He made me sit and watch him finish it.

Do you think I took care to meet those standards next time? Oh my word yes dear reader. I tried to better them! 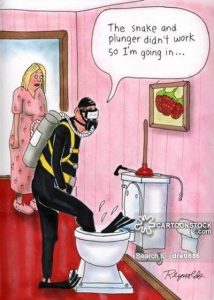 We come now to that fateful day I mentioned at the start of this article. I had been working for Tops for about 6 months, and we were on a job…I had only just started in the public bar area when Tops approached me. He was carrying a couple of snorkels and diving masks that he had fished out of the Bongo van.

“Hey Briany” he said “Put these on and follow me.”

Tops led me to the Men’s Toilets and I was expecting it to be a joke of some kind…maybe the other guys were waiting with water bombs or something. I was therefore not prepared for the sights and smells that assailed me when he opened that door.

I don’t need to go into details do I dear reader? Let me gloss it over for you and simply say that to this day I can’t imagine what kind of state a person or persons have to be in, in order to spread ordure over the walls, floor and ceiling of a public convenience, but I do know the effect it had on me. 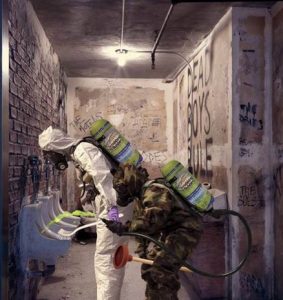 After I’d finished gagging, Tops got some hoses and together we washed off the worst of it. He then went and got the other guys and we all (retching and coughing the whole time) cleaned and disinfected every square inch of that toilet.

At this stage of the night Tops decided on a rare smoko and broke out some of the pub’s potato chips and nuts and poured us all a beer. Then it was hard at it again until we’d finished. The rest of the cleaning had to be done to our normal high standard of course; the unusually nasty state of the toilets and the extra time we’d spent on them was not an excuse to cut corners on the rest of the job.

I loved working for Tops. I will always count him as one of the best bosses I ever had and we’re still in touch to this day. I contacted him before I wrote this and asked if he remembered that particular night and he said, “Gee Briany! I cleaned so many shitty toilets back then…I guess they’re all just a blur to me now!” 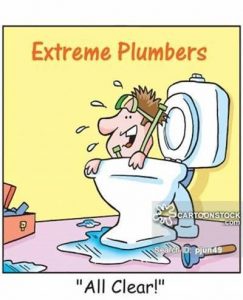 As usual, he made me laugh, and he used to make the team laugh too and that was the secret to his success I think. Tops believed that any work could and should be enjoyable, and he showed us how it could be done.