An article by Dean Tuckey, August 2015

Just last week I was meeting with a new Human Resource Manager who was having to deal with the fallout after a person acting in a role for two years had been turned down for permanent appointment due to inadequate performance. The person’s real grievance was that not once in two years had their manager or anyone else suggested that their performance was not up to standard. 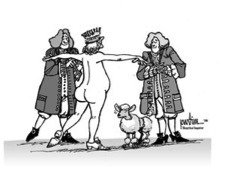 I’ve tried putting myself in that person’s shoes and it was not at all hard to imagine how they felt when they were told why they would not get permanent appointment to the role. I imagine that they may have felt embarrassed, degraded and then angry. Can you imagine thinking you have been doing a good job for the past two years while those working around you saw you as an underperformer? Overnight you have become the Emperor who discovers he is wearing no clothes.

I think most of us would view this as unfair and would like to think that if we were this person’s manager we would proactively discuss their performance as required. The research however does not support this view. Research from Vital Smarts reported that 90 percent of respondents claimed that poor performance and poor behaviour were often left unchecked for years in their organisations.

We have evolved a finely tuned survival mechanism. In fact we could say that it is so finely tuned that it would not be out of place to label it neurotic – having a tendency to be unusually anxious. It kicks in, and like an over protective big brother assumes control when all we really need are coping strategies. The survival mechanism gives us a dopamine hit (a natural opiate) which rewards us for avoiding danger, which in this case is the difficult conversation with a staff member.

One implication of our survival systems neuroticism is that it lacks discernment – it judges all threats to have the same consequence, namely death. To the limbic system, a Sabre-tooth Tiger and a difficult conversation are the same things, both appear as equally threatening.

Many of us have trouble admitting to ourselves let alone anyone else that we are scared of having a difficult conversation. We engage in self-deception and experience fear masquerading as sound justifications.  We convince ourselves that:

–        the person’s  performance will most likely improve by itself

–        we have other more important priorities right now

–        we’ve seen the person flicking through the paper, which means they are probably looking for another job anyway

How do we move beyond this self-deception and do the thing we know we should?

People want to perform. At our core we want to feel and be recognised for making a contribution to the group. We want to have the opportunity for mastery and to be seen as competent by our peers. When we choose not to give people feedback we deny them the opportunity to reach their potential. We limit them and we hold them back. We need to ask ourselves why we would do that to another person.

Why do we see it as completely normal to provide feedback to our child about adjusting their grip on the cricket bat, but freak out and are reluctant to feedback to a team member a new approach to running team meetings. Aren’t the meta-objectives the same – to grow and develop both? To enable both to perform better tomorrow than they do today.

Maybe it is about the long game. With our children we are in it for the long haul. We see them being upset with us from time-to-time as par for the course – a necessary part of the journey and ultimately for the greater good. Maybe it is because we recognise that without the feedback our child will not improve.

The reality is in fact the same for adults, without feedback we cannot improve. Human beings cannot change that which they are not aware of. People filter their world and see themselves acting in ways that fit with their self-image. Everyone and I mean everyone has blind spots between how they actually behave and how they believe they behave. It is only when someone cares enough to provide us with feedback that we have the opportunity for insight, adjustment and growth.

True leaders frame the difficult conversations differently from most. They see them as:

–        coming from an intent to help, grow and develop the other person

–        demonstrating respect for the individual and the team

Take a moment now to consider how you frame feedback and decide if they help or hinder your efforts to proactively engage in the difficult conversation.

Posted in Blog
← Why are people such Arseholes?How to never be in Justice Dyson Heydon’s position →