“He never says good morning to me. To say please or thank you is just too much trouble. I’ve never seen him open a door or offer a chair to anyone. He just throws things onto my desk and says ‘Do these for me by five!’ He will get me into his office and sit there drinking a coffee in front of me…never offers me anything! Honestly, I’ve never met anyone more arrogant in my whole life…it’s like working for a caveman! And his manager is just as bad! Why are some people just so rude?” 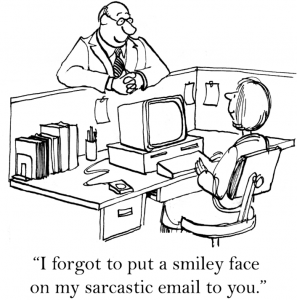 Sound familiar? It’s certainly a common theme in many workplaces we encounter, and it can be a prime factor underlying workplace bullying cases, which are often sparked by relatively trivial issues. When Worksafe Victoria reviewed the bullying complaints it handled in 2011-2012, it reported that more than two-thirds were not substantiated and fewer than one percent were serious enough to warrant possible prosecution. Michael Tooma, a workplace lawyer with Norton Rose and a writer on occupational health issues says, “The reality is that many of the cases that are brought are just someone being upset because they are being performance managed or someone criticised their work. I have investigated all sorts of cases where the complaint is no more than ‘A person didn’t say hello to me’ or “they didn’t speak to me before they opened the door’.”

So why are some people so rude? We often try to explain perceived rudeness by ascribing negative personal characteristics: Mary is rude because she is a bad person. She is arrogant and conceited and doesn’t care about others, and these qualities are exemplified by her not responding to my greeting in the morning. We often take the attitude that Mary’s behaviour is deliberate, and directly aimed at ourselves personally. The truth however, is that rudeness is very rarely deliberate, and since what constitutes polite behaviour is entirely subjective, my own definitions will proceed directly from my own background and upbringing.

Let me give you an example. A young couple rented the house next door to me about two years ago. They were in their early twenties and had three young children. They were both employed, he was a labourer and she worked part time at a fast food outlet. They liked to conduct conversations in the front yard, and since they always spoke as if they were trying to be heard above the noise of an approaching hurricane or something, their dialogues were clearly audible to me and about half the street.

To understand the nature of these exchanges, while still retaining a PG rating, I need you to use your imagination for a minute. I want you to think of two or more words which you consider to be the most offensive and obscene terms in the language. These words are ones you would never dream of using yourself, or at least would not use in public or in front of your children or grandma. Ok, do you have those words in your head?

I’m going to give you an example now of a typical exchange I would overhear from next door, and I will use the word “bang” as a substitute for their actual language, and as you read the following, perhaps you can substitute your own taboo words instead (not out loud you understand!), and in this way you’ll get an idea of what I’m talking about. Ready? Ok, so here’s a very typical dialogue…

HIM – What banging money?

HER – The banging money for the banging parts you banghead! What the bang else would I be banging on about. You bang. He banging called again this banging morning.

HIM – Bang off! I paid the banging bangster as much as he banging deserves. Bang the bang eared banger! Why doesn’t he banging come to me about it?

HER – Don’t get banging angry with me about it! I’m just the poor banger in the middle. I don’t need this banging bang around.

HIM – (Putting his arms out) Oh you poor banging bangette! Come here! You know I banging love you, you stupid banged off banger.

(They laugh and hug)

Now I can assure you that whatever epithets you might have inserted for yourself you’re still going to be nowhere near the actual language these folks employed in their everyday speech…these guys would make a stevedore blush, and they could keep it up for hours at a time!

So what was the reaction from their neighbours? Well like me, they assumed the worst. These people were rubbish…the way they spoke to each other and their children branded them as bad people…probably criminals and drug addicts…and definitely as unfit parents. It came as quite a shock to me then to discover that this impression was completely false.

Once I got to know this family a little better I came to realise that they were genuinely loving to each other. These parents doted on their kids and worked long and hard to provide the best they could for them. Their life was not easy but they approached it with humour and good will, and they made real and practical efforts to be good neighbours; they would bring my wheely bin in for me, or mow my footpath while they were doing their own, they’d always wave and greet me when they saw me and once came to me before they had a party to urge me to let them know if they were being too noisy! Over time, I had to admit that I grew to like and even admire them, even though their manners, particularly their use of obscenities, were completely at odds with my own ideas of politeness.

This baffled me until I met their own parents, who visited from interstate to spend some time with their grandkids. Both maternal and paternal grandparents stayed with them for a month or so and you may not be surprised to learn that they spoke in identical fashion! They too were obviously crazy about the kids, they were open and friendly to me and the other neighbours, and likewise habitually used language that made other people recoil in shock.

The fact is that ‘manners’ and how we use them, like all our behaviours is mostly learned, it’s not innate. In fact the science suggests that our behaviour is only about 30% determined by our genetic inheritance (Nature), and 70% by our environment and upbringing (Nurture). I found my neighbour’s language challenging because of my own nurturing; I came from a family where the use of certain words would result in having my mouth forcibly washed out with soap! When I met the grandparents I understood that my neighbours’ behaviour was simply to do with their own upbringing, where the use of that sort of vernacular was just par for the course.

They were not ‘bad’ people because of the way they talked, it was only my judgement of their behaviour that made me think that way, and of course my own judgement was mostly based on what I’d been taught to accept as normal.

That didn’t mean that I started to adopt their language or actions as my own, I was never tempted to say to my own wife ‘Come here you stupid banging banger you know I banging love ya!’, (well to be truthful I may well have been interested to try it just to see her reaction, but I’m not that brave), but it did allow me to put aside my own prejudices and try to see the real human beings behind their (to me) unacceptable behaviour.

There are a number of strategies that can help us put the whole idea of politeness and good manners in perspective and that’s something that we’ll discuss next time. In the meanwhile I urge you to try and view other people’s rudeness as being more about you than it is about them, our personalities are all greatly influenced by our own backstory, and a different upbringing doesn’t necessarily make me a ‘bad’ person.