Ever been part of a growing workforce? Ever had responsibility for forming or managing a team? Ever wondered how the recruitment process can still get it so completely wrong? Have you ever hired a mini-me? Belbin Team Roles can be a powerful tool for creating balanced and productive teams.

A successful team is made up of specialists…not all-rounders. You don’t select the prop forward to play on the wing, the goalkeeper isn’t in the side for her strike power and you don’t expect the wicket keeper to open the bowling. Different roles require different skill sets and in a work team you need to have a balance of working styles and behaviours.

Meredith Belbin identified nine key roles that are present in successful teams. The Belbin typology is not a personality test…what it measures is behaviours, preferred ways of working and producing.

This isn’t really a new idea, you can find similar concepts in Hippocrates or Galen, (dead Greeks is all you really need to know), or in ancient Hindu or Buddhist teachings. Humans naturally tend to lump people together into ‘types’, and we predict their behaviour based on our own preconceptions.

And our preconceptions aren’t baseless anyway. Our working patterns and behaviours come from two places, our genetic predisposition and our experience and upbringing…from both nature and nurture if you like, and we easily recognise behavioural traits that we see mirrored or repeated in our friends, family and work colleagues.

When my Aunt Miriam goes on holiday she has everything planned out to the finest detail. She has itineraries, timetables, cash and cards and clothing for every weather contingency. She is always early for every plane, bus or ferry and she is always fully insured against any possible catastrophe.

My Uncle Harry on the other hand, is liable to arrive at the airport just in time to make his flight. He probably won’t have a suitcase, (“I can just pick up some stuff when I get there”), he will have lost his ticket, he will have no accommodation booked or even any idea of where he is staying, and his idea of travel insurance is a packet of lollies to stop his ears from popping in the plane.

We might call Uncle Harry’s approach to vacationing as impetuous and risky, whereas Aunt Miriam’s is methodical and structured. They are both quite capable of having a wonderful time on their holiday, but you can well imagine the kinds of problems they might encounter if they have to work together as part of a team. 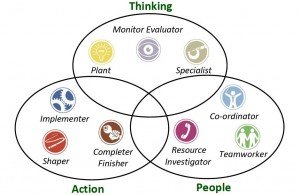 Identifying Belbin Roles enables you to build a balanced team, and avoids the trap of ‘like hiring like’, or recruiting a team of ‘mini-mes’. If Aunt Miriam was in charge of forming a team she would be stacking it with people ’like’ herself, organised, structured and systematic. Uncle Harry on the other hand will want free spirits, he won’t want to hire people who he sees as uptight or too concerned with details.

A team full of Aunt Miriam clones will not be a very successful team, they might have plenty of process but not enough imagination or vision. The Uncle Harry team might have plenty of ideas, but may never meet a deadline or actually produce anything at all! Belbin identifies our preferences over nine different roles and can help us to understand our own and others preferred methods of working, and so build balanced and productive teams.

Posted in Blog
← JCU Administration Conference 23,24 April 2014STEREOTYPES PART 2 – A cautionary tale from the trainer’s past…. →