Jobseekers in Townsville can look forward to their best prospects for finding work in seven years, according to recruitment specialist Clayton Cook. 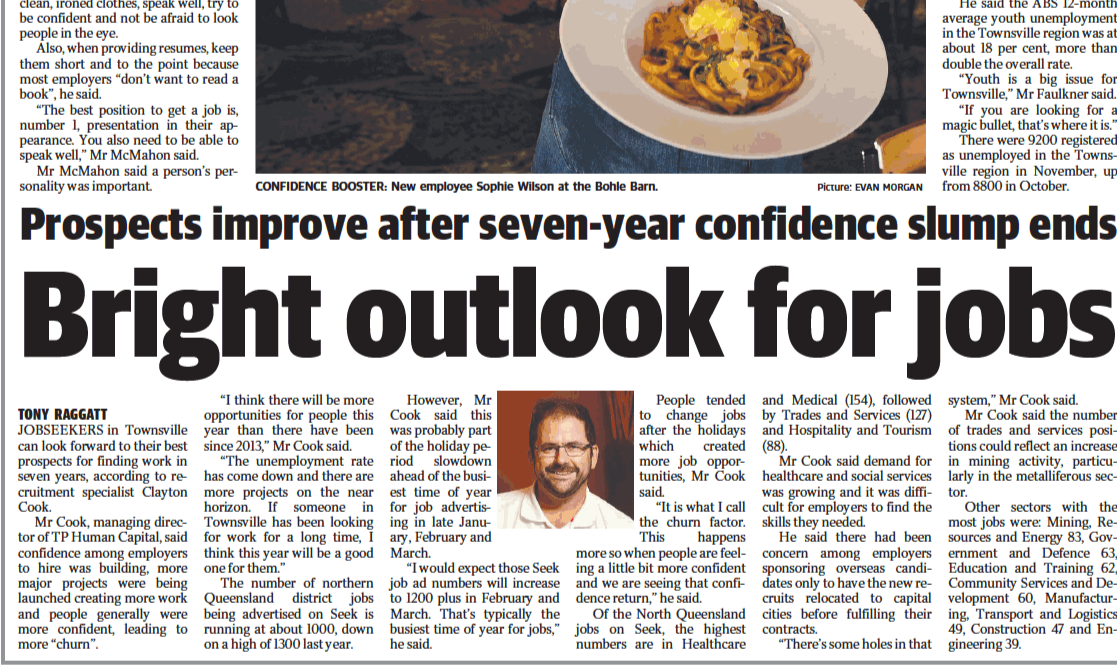 JOBSEEKERS in Townsville can look forward to their best prospects for finding work in seven years, according to recruitment specialist Clayton Cook.

“I think there will be more opportunities for people this year than there have been since 2013,” Mr Cook said.

“The unemployment rate has come down and there are more projects on the near horizon. If someone in Townsville has been looking for work for a long time, I think this year will be a good one for them.”

The number of northern Queensland district jobs being advertised on Seek is running at about 1000, down on a high of 1300 last year.

However, Mr Cook said this was probably part of the holiday period slowdown ahead of the busiest time of year for job advertising in late January, February and March.

“I would expect those Seek job ad numbers will increase to 1200 plus in February and March. That’s typically the busiest time of year for jobs,” he said.

“It is what I call the churn factor. This happens more so when people are feeling a little bit more confident and we are seeing that confidence return,” he said.

Of the North Queensland jobs on Seek, the highest numbers are in Healthcare and Medical (154), followed by Trades and Services (127) and Hospitality and Tourism (88).

Mr Cook said demand for healthcare and social services was growing and it was difficult for employers to find the skills they needed.

He said there had been concern among employers sponsoring overseas candidates only to have the new recruits relocated to capital cities before fulfilling their contracts.

“There’s some holes in that system,” Mr Cook said.

Mr Cook said the number of trades and services positions could reflect an increase in mining activity, particularly in the metalliferous sector.

Other sectors with the most jobs were: Mining, Resources and Energy 83, Government and Defence 63, Education and Training 62, Community Services and Development 60, Manufacturing, Transport and Logistics 49, Construction 47 and Engineering 39.

Posted in Media
← The Moving Beast- Covid 19What does the JobKeeper payment really mean for your business? →