Traditional bonus and rewards given by managers have fallen under the ‘if – then’ system i.e. if you achieve ‘X’ then I will give you ‘Y’. While on the face of it this approach to rewarding staff seems reasonable it has several downsides. Firstly, the motivation for achieving higher performance in the activity has become extrinsically generated by the manager rather than the individual. Secondly, the positive motivational effect of the reward tends to be short term; what was once a bonus is now an expectation and without a continued increase performance tends to drop to below original levels.

You can see the same thing in children. The child who once put the rubbish out and mowed the lawns as part of making a contribution to the family home will no longer do it for free once a financial reward has been given.

The idea is not to totally throw out the idea of ‘if –then’ rewards, but to add more strings to your management bow. ‘Now – that’ rewards i.e. now that you have achieved ‘X’ I will give you ‘Y’, are the surprise carrots that the recipient had no idea were coming. The benefits of ‘now – that’ rewards are that the motivation is intrinsic; the implied message is that achieving and doing well in the task is satisfying and motivating in its own right. Also, the reward is more positively received because it was not expected – this means that the reward can be ‘less’ but have a bigger impact.

Many commissioned sales people state that they could earn more, but that they do not see the extra effort being worth the reward, reinforcing the idea that higher potential bonuses do not necessarily lead to better performance.

Think about how you currently reward your team and if there are opportunities to reduce ‘if – then’ rewards and implement more ‘now –that’ rewards. 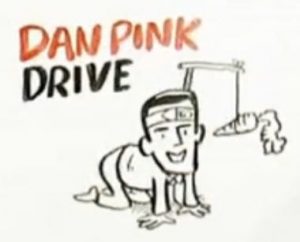 Drive: The surprising truth about what motivates us