Townsville once depressed and insecure is quietly, confidently, achieving. Recent official workforce data (August ABS data)reveal a positive performing region with a variety of industries contributing to a net positive result so far, year to date. This is very different to the national trend and many other regional experiences.

Regional Economist Colin Dwyer said “Townsville regions jobs performance remains outstanding. Employment numbers have jumped to 115,800 up 4,400 for the year to August. The Official 12 month unemployment rate dropped 2.6 points year on year to 5.5% and the regions participation rate has improved. Part of the reason for the positive job’s performance was a positive Agriculture, Mining, Construction performance, solid confidence and no covid restrictions. Multiple industries and businesses are creating job opportunities in Townsville region. Townsville is in the right place at a challenging time and doing a bloody good job.”

Director of TP Human Capital Clayton Cook said “last week’s data saw Seek jobs advertised for Townsville and for North Queensland officially the HIGHEST number in 7 years” and “the SEEK data revealed a substantial variety of jobs on offer. The highest number of jobs advertised was in followed by Healthcare and Medical (62), followed by Trades (53), Government and defence (36) and Manufacturing and Transport (35). In total, in the week ending 20/09/2021, there were 456 new job adverts around Townsville region and 1780 (new & older) job ads in total. Compared to the same time last year, Job ad numbers were up over 28%. A strong diversified recovery.

While QCB stadium is working its economic magic, Townsville regions economy is performing well and its not just the stadium. House builders are busy, nursing and caring are doing well and leading into the busy Christmas period, local Retailers are selling and looking for staff.

Mr Dwyer said “Townsville has a different set of challenges compared to five years ago. Due to covid, international education and tourist accommodation sectors are underperforming. Insurance remains expensive, unaffordable and in some cases unobtainable (massive issue). Some skilled workers are in short supply, and in particular unskilled workers in many industries for example Civil, hospitality, manufacturing.. in term disrupting production and growth in many industries. Competitively priced, reliable and sustainable baseload power remains a challenge. Crime and its reputation remains a drag on Townsville region. Local potholes and unsafe highway bridges remain a challenge.”

“But, despite these challenges, Townsville is in a MUCH MUCH better place than five years ago”, he said.

Townsville, once depressed and insecure is quietly, confidently, 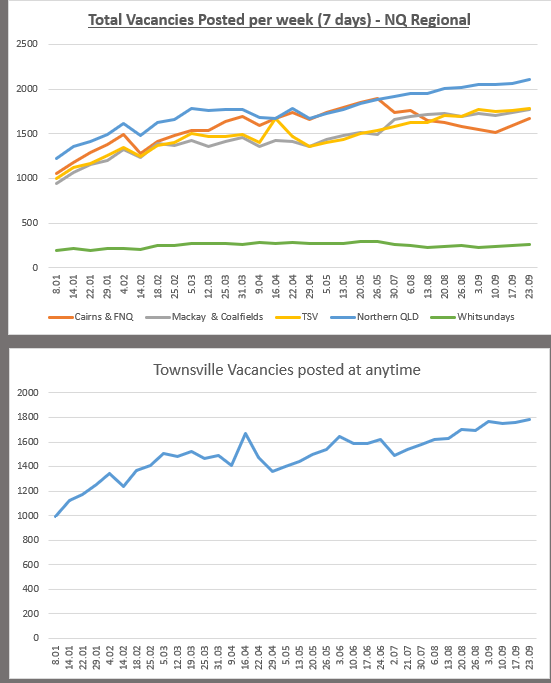